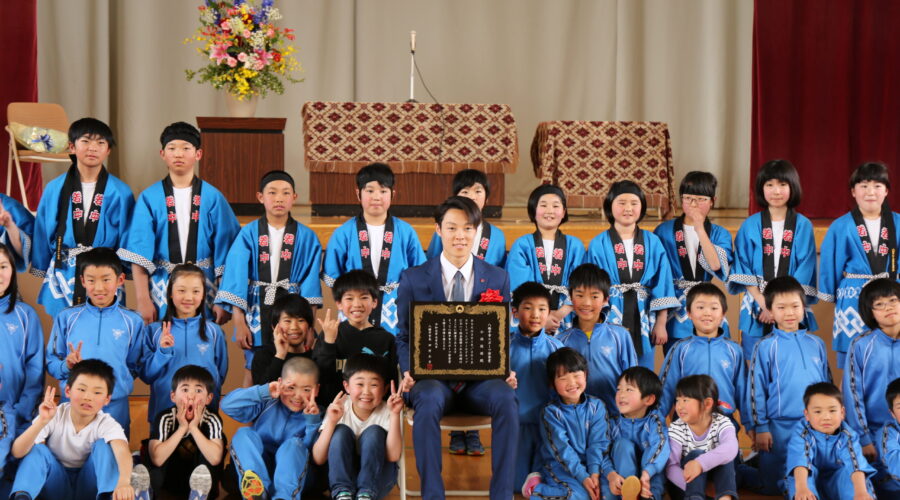 Ryoyu Kobayashi, a Japanese ski jumper of international fame, has won thirteen World Cup events and won all six possible titles in the World Cup season, including the overall title, the Four Hills Tournament, the ski flying title, Raw Air, Planica7, and Willingen Five. In the 2018 Winter Olympics he placed 7th in men’s normal hill, and 10th in men’s large hill. He’s still just 22 years old with a long athletic career ahead of him.

And he’s also from Hachimantai, Iwate! He returned to his hometown for a visit and visited a local elementary school on May 9th, 2019.  He fielded a number of questions from the children, from simple ones such as his favorite fruit (strawberries), and anime, to explaining how he first began jumping at the age of 5 years old, when he built a small jump in the yard of his house and used it while wearing cross-country skis. He also disclosed that he does summer training on Miyako Island in Okinawa.

Though he travels throughout the world, he stated that he holds Hachimantai close to his heart, and always cherishes the vast rich natural environment there. He loves the way the landscape erupts in color in the fall, and of course can’t get enough of the great powder snow that covers the slopes come winter.

This is for Real, Outdoor Bath with Milky White Water!

Forecast calls for lots more snow tomorrow! It's been a bit too warm the last couple days, but all that

Come to the Snow Festival!

The Hachimantai-Appi Snow Festival is being held in Hachimantai until the 28th of February! There was a fireworks display celebrating